Today morning I started off with a bad back. However, I felt that my back would be better as the day progressed. In the morning briefing we were informed that the forest stretches today would have to be done in groups and we would have to get out of the forest by 6:30 pm. Started the day a little late after relaxing and stretching my back. Started very slowly and started putting pressure on my pedalling only after about 5-10 kilometers.

The 1st thing I chanced upon today was Gagan in his support bike. I started by asking for pulpy orange. I was beginning to enjoy the frequent support motorcycle visits for the pulpy orange infusions. Of course , Gagan was probably used to doling out general dollops of juice to me, and of course I would ask for a menu card every time he came over. One mention of the attraction of the day, sugarcanes had me tempted. I started off with a big stick, and realized it was a fairly sweet way of staying hydrated, the natural salts in the sugarcane , the sugar and the water should be enough , if supplemented regularly with plain water. Decided to try it out for some time. I took leave of Gagan and about 5 km or so , saw Manju and Yogesh exchanging pleasantries with a huge roadside shack cooking something in a huge vat over a wood fire. Took a break and realized this was a jaggery (Gud, unrefined lump sugar with the molasses ) making unit. Yogesh mentioned that half cooked jaggery that is just being warmed up would taste great, but unfortunately the vat was in its advanced stages of making jaggery. Instead we were treated to dollops of jaggery and lots of sugarcane juice as a reward for our visit and of course as a token of friendship from the jaggery makers. I had my filled and continued. My back pain which was subdued a bit came back, and I decided to just go hit the 1st service station (which was just before Chamrajnagar I think) and take a short break. Once I hit the SS, I just hit the ground and lied on my back, trying to arch it back and stretch it. Got a good massage from Sameer , relaxed, had some coconut water ( A couple of them had set up camp for the day , courtesy SS1 and were doing a lot of business). Put some muscle rub on my inflamed back. Spent about an hour here and then started off, with Yogesh, Manju, Prem Sagar and co. My back experiences and mails about Paracetomol resulted in some discussion about medicine between me and Prem. We went together in a relaxed mode for a big stretch and then hit up on an uphill. Somehow I hate uphills a lot because they don’t allow me to relax, so I just stood up and decided to clear it in a hurry. After the uphill, I didn’t see the rest with me so just continued alone. Once we took the turn to Sathi road from Chamrajnagar, after a few km, we went through some beautiful forests. I hit upon Sameer and Raghavan having some food/tea in a roadside stall in the middle of the forest. Given that I was feeling energetic, I declined their offer of a cup of tea in the stall and just continued. The next SS was after a big uphill some distance before the town of Gajanur. 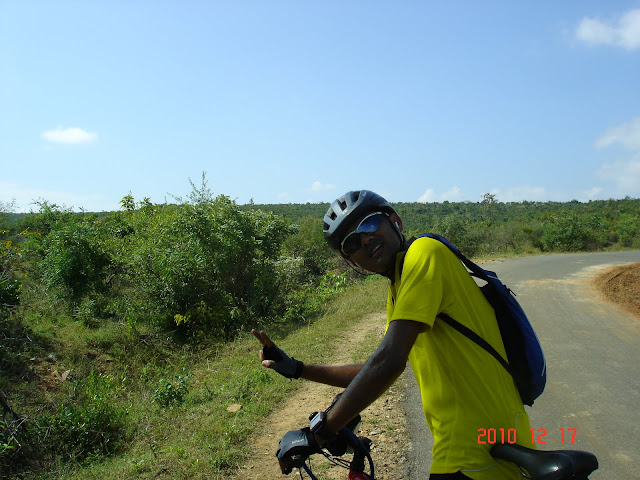 I think the TFN organizers were putting most of the SS at the end of uphills. Good to have an SS after an uphill, but bad to make people pedal on an uphill to avail support. After this support station started the worst stretch of the day. There was a long downhill after this with a bad road but not particularly bad for me, in any case I’m too scared to speed on downhills, unlike many of my co-bikers in TFN. There was a stretch which was particularly open to the sun and blistering hot. I took a rest, the support bike came and I helped myself to some juice. I again got exhausted after barely 50 meters . Pramod, Yogesh, Vishnu and Shankar caught up with me. We took another break here (brought back memories of a June 2010 ride to Anchetti where we were just inching forward and took close to 2 hours to cover 25 km. Once we went forward about 100 meters a breeze started to flow and it felt more comfortable. Amazing how we get these micro-stretches where it feels impossible to continue only to be followed by some stretches where suddenly things get easy. Went to SS3 where the food was served. Today’s food was quite spicy and ended up feeding it to a dog.Amazed at a (primarily) carnivore’s taste for spicy potato masala and Chappathi. Of course the biscuits, juice , etc made up for the food. Had my fill and continued.

This last stretch we had to go via Gundlupet to the forest. I suffered some back spasms about 20 mins after SS3. Vishnu helped put some pain balm on the area and Yogesh arrived to duly take a picture of my bare back. Manju , Amit, Pramod joined after some time. We reached SS4 which was after the turnoff to Bandipur from the Gundlupet – Sultan battery highway. Once this station was done, I thought I’d just speed up and reach the lodge in a hurry. Bad, bad mistake especially since I already had a bad back. I cycled like crazy and was totally out of breath 2 km before the forest entrance. There was a coconut vendor, we finished off a couple of elaneers and then trudged ahead. Pramod, Manju and Yogesh caught up at the forest gate. The cycling through these uphills were probably the most miserable stretch of my cycling life. I was completely out of breath, out of fluids and borrowed from my mates every now and then. I have been through this stretch 2 years back in a car, and somehow these uphills did not register in my brain. Once we completed the stretch and reached the forest headQ, we found a herd of 100 deer eating on the road side. Some guys took pictures but it was probably too dim. From here, we went towards the resort, and the road felt never ending. Once we reached the edge of the road and took the mudpath, we expected the resort to show up, but I guess we were still close to a km away. 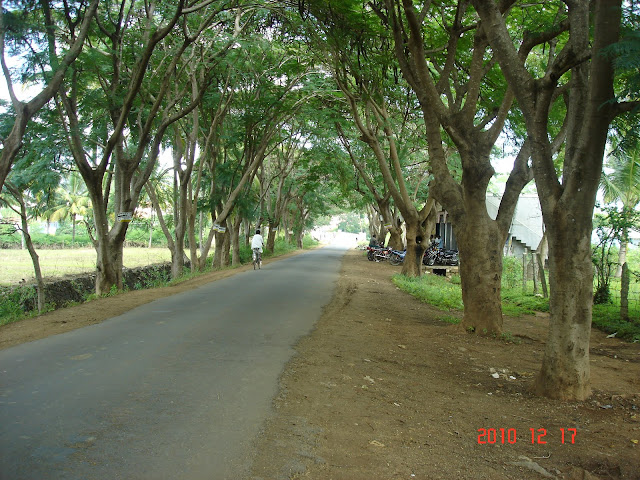 Was immensely satisfied with the days ride. I had done 2 consecutive 100 mile days. Todays mileage read 161 km. Also I had to fight good back spasms today to complete the ride. I’ve managed to do that earlier, but with the time pressure of the sweep truck, this was definitely a challenge. Spent some time playing ping-pong and generally hanging around. Dinner was served and it was quite princely. I remember devouring at least 8 eggs from the egg-curry. The dinner also had some gajar halwa to go with the sumptuous food offered. Misplaced my mobile. Vinodh from the support team found it. The surroundings were really good in the middle of the jungle. I remember a friend who had stayed in Tusker Trails telling me that wild dogs had come to the compound near the swimming pool. Hoped to see something as exciting as well.