A call for a long ride to Yelagiri ended up with Anup forcefully letting me know that he would come. The plan was to start around 8-9 pm. Unfortunately I did not have enough sleep the previous night, so asked to postpone it to start after midnight. I went to sleep a little after 9 pm and got up at midnight. I left home at a little after 1 am, and reached Singhasandra/hosa road junction at around 2 am.(After fixing up a time of 1:15 with Anup, it took me a bit of time to get ready)
We started at 2 am from there, and then steadily pedalled, we did not take any breaks till we took a left towards Chennai. This was around 105 km and it was about 6:45 am or so. We ended up spending 45 minutes drinking tea and having some idlis on a roadside small shop. From here we went on towards Yelagiri, taking a route that went parallel to the railway track, taking the road off the highway from a place called PuthuKovil. We missed the official Google route and ended up riding in some bad sections till we hit the Vaniyambadi highway. However we hit the road right at the entrace of Ponneri. The last 10km or so reminded us of the amazing routes set by the erstwhile IISc Randonneurs. At one point I followed a local motorcyclist’s track over a water logged road, trusting him, while Anup decided to just walk the stretch. And yes, a dog decided to chase me at one point.
The climb itself didn’t go as well as planned, I wanted to tackle it in one continuous ride but at around the 7th hairpin my back ache became too much. From this point onwards, I had to keep stopping to stretch my back. In fact for the rest of my journey my back ached quite a bit, and as I am writing this, I can see that the inflammation hasn’t yet completely dissipated. I ended up stopping multiple times beyond this point, and reached the top of the climb at 10:10 am. Anup followed a few minutes later at 10:20 am. I recorded this section on Strava, and it showed me a timing of a little more than 1 hour, 4 minutes.

My last big ride was to Anchetty on Aug 15 2018. Before that I had gone to Basavanabetta in Sep 2017. (+ a ride from Kalpetta to Mysore, which is a little more than 100km) And before that in 2016, I had gone twice up to Yelagiri, and in Dec 2016, I had gone to Basavanabetta. The last ride when I had done 200+ miles at one go was during Bliss In The Hills 2015. So a long ride was long overdue , I just to check if I could even do it. The only thing that works in my favour is that for the past two years my daily commute has been 47km, with my office 23.5 km one way, so even though I’ve been slacking on weekend rides, I’ve got some miles against my name. Last year I managed to ride 9400km with only one ride to Anchetti. So effectively it has been 14+ months since I rode a distance of 180km+ and 3 years since I rode 200+ or 300+ rides.

Once we reached the top, we needed a break, the ride up was in intense humidity and moderate+ heat , and while I was thankful I did not cramp, we needed a break, and Anup felt the same. So we went on to have a course of breakfast and some leg stretching. And as usual, we started back on the way down at around 11:20-30ish. on the way back we took a left , went past Jolarpettai and took the u turn point towards Natrampalli. We got caught in a torrential downpour, and it was amusing to see all the motorcyclists take cover while we continued pedalling. We hit the main road riding non stop, and stopped at a spot 12km before the right turn. Anup managed a short nap here + we had some tea, and we continued towards Bangalore. After we took a right turn, Anup went ahead, and I started drifting into sleep

So I had to take an impromptu stop, help myself to a Kumbakkonam degree coffee, some groundut chikkis, some stretches , and got some chewing gums to keep chewing and trying to keep awake, and of course, try and catch up with Anup. I managed to catch up with him before Shoolagiri, which is where we had decided to eat some food. I remember seeing a Kamath on the side towards Bangalore, but that was no longer there. Anup was in a hurry to reach home, and had a mild stomach issue, so wasn’t interested in eating. We managed to ride at a decent speed throughout but had to take short stretch breaks. I kept getting some back ache, he was slowing down a little. I wanted to eat something but was keen not to ride alone so kept going with him. However at Attibele, we decided to take a short food break. We had a glass of juice each and I helped myself to a plate of idlis.

Since he was in a hurry, and I needed some stretching to restart , I asked Anup to continue from here. I started after about 10 minutes, and could not catch up with Anup after this. I had also got pollution masks and was dressing myself up to deal with the air. His home probably was about 15km from here. The traffic was fairly heavy hereon , and the atmosphere somewhat polluted with all the crackers. Just 4km from my home I suffered a pinch flat and had to find a place next to an apartment to change my tyres. Some lady put some firecrackers not far from me and a stray cracker hit me  — but no harm done. I reached home a litte before 9. 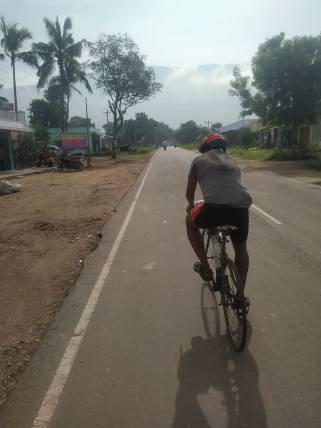 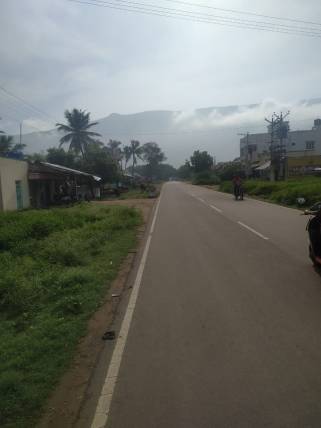 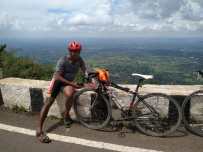 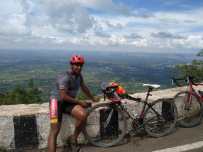 Post script :  I posted this ride blog after a long time , for the following reasons